Just added to your cart

Sale only this month, in celebration of The Feast of Our Lady of Fatima. ENDS TODAY

Adding product to your cart

Official Our Lady of Fatima

Bless your household with the statue of the Miracle of Our Lady of Fatima.

Transform your home in a safe haven in which you may seek the comfort of the warm embrace of Faith, and protection from the difficulties of life: disease, poverty, ill intentions…

Our Lady of Fatima is followed all over the world by thousands of pilgrims moved by their faith in the Miracle of the Sun. Hundreds claim to have been cured of diseases and ridden of other ailments by the Virgin. Among them is Pope John Paul II, who credited Fatima for his survival to the attack on his life:

"The Blessed Virgin Mary, the first of the redeemed, the first to have been closely associated with the work of Redemption, will always be our guide and model." - Pope John Paul II What is the origin of the Miracle of Fatima?

Our Lady of Fatima, the Blessed Virgin Mary, is known for Her apparitions in 1917 to three shepherd children at Cova da Iria, in Fatima, Portugal.

The Miracle of Fatima (also known as the Miracle of the Sun) happened between May and October on the 13th day of each month, at approximately noon. The three children: Lucia and her cousins Jacinta and Francisco (ages 7, 9 and 10) were spoken to by a luminous lady who entrusted them with three secrets.

The first secret was a frightening vision of hell, “where the souls of poor sinners go,” and contained an urgent plea from Our Lady for acts of prayer and sacrifice to save souls, with particular emphasis on praying of the rosary and devotion to the Immaculate Heart of Mary.

The second secret prophesied the outbreak of World War II and contained the prediction of the huge damage that Russia would do to humanity by abandoning the Christian faith and embracing Communists’ totalitarianism.

The third secret was not revealed until 2000. Its revelation coincided with the beatification of Francisco and Jacinta. It did not contain any cataclysmic prediction, but, instead, the vision affirmed the immense suffering endured by witnesses of the faith. Sister Lucia, the surviving member of the three children, confirmed that in the vision “the Bishop clothed in white,” who prays for all the faithful, is the Pope. As he makes his way with great difficulty towards the Cross amid the corpses of those who were martyred, he too falls to the ground, apparently dead, under a hail of gunfire. It is possible that the vision predicted the 1981 attack on Pope John Paul II’s life. The Pope has always credited the Virgin for his survival.

The Miracle of the Sun occurred in October 13, when a crowd of seventy thousand people who had gathered in Fatima, in response to a prophecy made by the three children. The prophecy was that the Virgin Mary would appear and perform a miracle on that date. The crowd witnessed an extraordinary zig-zag dance of the sun in the sky that lasted ten minutes that afternoon. No one had ever seen such a phenomenon. The whole crowd was in awe.

What is the Sanctuary of Fatima?

Located in the center of Portugal, the Sanctuary of Fatima built in honor of the Miracle has become the fourth biggest Catholic pilgrimage site in the world, receiving between 4 and 5 million visitors every year. Both Pope John Paul II and Pope Francis have visited the Sanctuary to pray to Our Lady of Fatima, next to thousands of devoted pilgrims.

The pilgrims gather for one of the most beautiful processions in the Catholic Faith: the Procession of the Candles. Millions of people light a candle and follow the image of Our Lady of Fatima at night as It moves around the Sanctuary, praying and singing Her praises.

Official Our Lady of Fatima characteristics:

The Statue of Our Lady of Fatima is made in Fatima by skilled Portuguese craftsmen, and carefully detailed in the face, veil, and crown. The Statue was blessed locally, is made of fiber, is 19.68 inches (50cm) tall, and weighs 2.42 pounds (1,9kg).

With the Official Our Lady of Fatima you get:

The 19.68 inches image of Our Lady of Fatima, a carefully crafted golden crown, a wooden base with nameplate.

You should handle the Statue of Official Our Lady of Fatima carefully, to preserve the high quality of the hand crafted and painted materials. The Statue can be easily carried during processions; however, it is not recommended to leave it outside permanently.

I ordered this beautiful statue as a Mother's Day gift for my Mom. She was very happy to receive it and Our Lady of Fatima now has a prominent place on our home Altar. Thank you Joana Luis and all at Loja Esperanca for your quality products and our excellent customer service!

J
Judite D'Souza
She is so beautiful

I purchased the Official Our Lady of Fatima statue in April 2021. She is so beautiful. I am so proud of it. It is truly made with professional art and pure imagination. So graceful and elegant. So rich yet humble looking. I loved the crown and the tiny rosary. She arrived to my home amazingly on a Wednesday. I was not ready with her space so I opened it, said my prayers, and put her in our bedroom. Amazing fact: I usually wake up in the night to go to washroom. That night when I woke up my bedroom was smelling of fresh flowers. I have been so peaceful since she arrived. She has been my companion, my comfort and my best friend. I would suggest that every catholic family welcomes her home. In fact today I ordered another one for my daughter who just bought her first house. 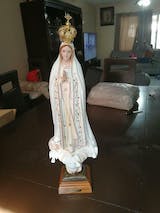 I just received my beautiful statue of the Lady of Fatima yesterday and my eyes weep every time I look at her! Sooooo beautiful! My favorite book as a child was the story of our Mother Mary and her visits to the three children. The miracle of Fatima shall ever be forgotten!! Thank you again for checking for me!!!

Loja Esperança is a religious art store in the heart of Fatima, Portugal, one of the cradles of the Catholic Faith. Our vast collection of sacred articles is made from the highest standard of silver, gold, and wood. All articles can be custom made.